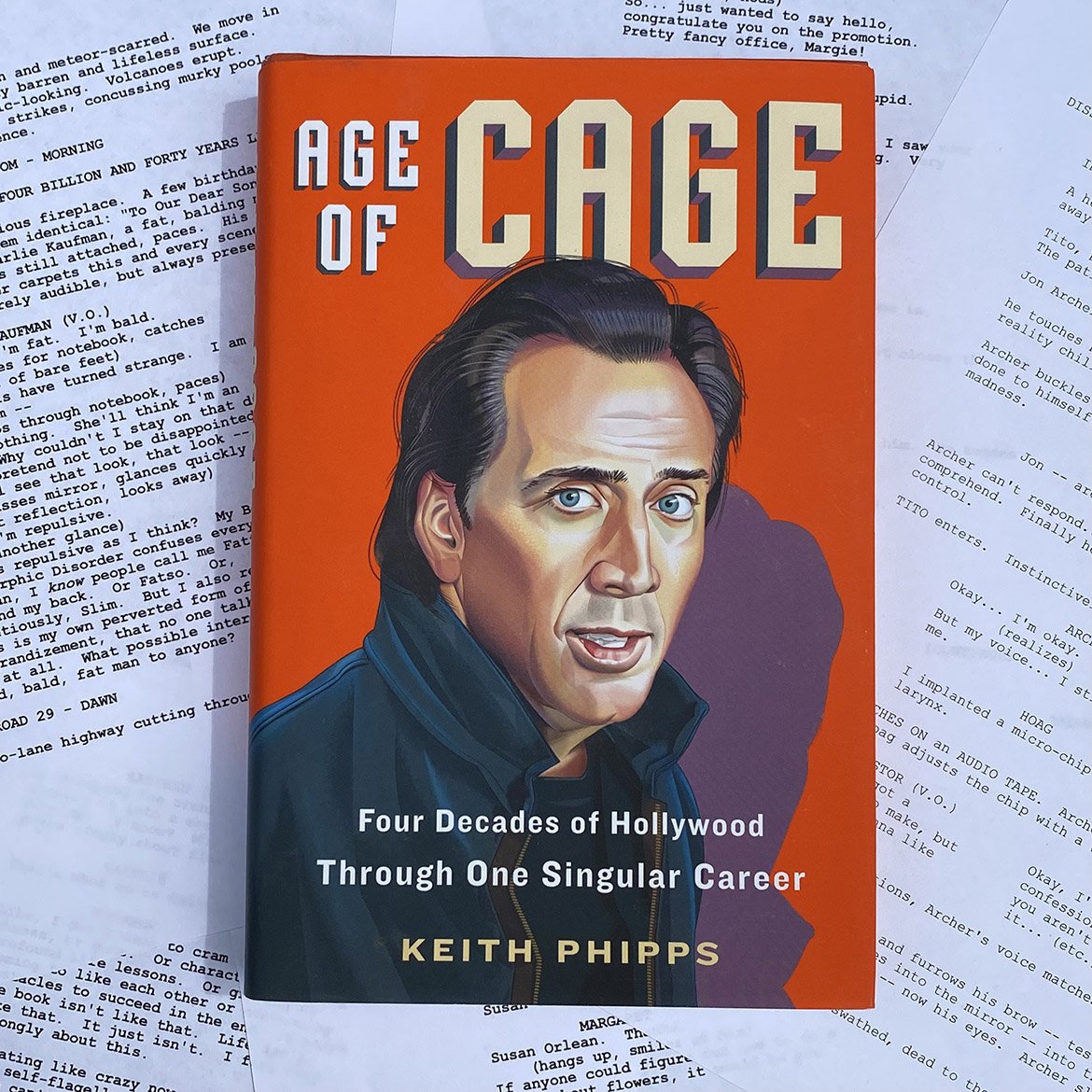 Age of Cage: Four Decades of Hollywood Through One Singular Career
By Keith Phipps

Like pineapple on pizza, abortion, and nerd-rockers RUSH, Nic Cage is a polarizing figure—people either love him or hate him.

The second group are fucking idiots and they already stopped reading, but for the rest of us this book is an encyclopedic tome of justification and awesomeness. A thorough and insightful look at the cinematic career of one of the most singular actors of the past half century:

Built solely on author insight, heavy research, and magazine/interview quotes from Cage and his contemporaries throughout the past 40 years, Age of Cage succeeds in corralling the creative chaos and artistic madness of a highly productive, maddeningly divisive, and utterly unique show business career.

Since sliding into the Hollywood film industry in the early 1980s as a shy (yes, shy) scion of the fabled Coppola family, Cage has since starred in 103 films and worked with some of the most respected directors in almost every genre. He’s also won a Golden Globe and an Oscar for best actor (and 5 Razzies for worst actor) for his unique, all-in-all-the-time acting style— a mix of German Impressionism, Japanese Kabuki, and a sort of historical batshit tribalism Cage himself calls “Nouveau Shamanic” acting . “I don’t even like the word acting anymore because it implies lying in some way,” Cage once told Variety. “I don’t act. I feel and I imagine and I channel.”

Whatever he’s doing—tapping into truths shrouded in the ether, or simply embracing the human sense of impulsive play and make believe better than anyone else—Nic Cage goes all-in on every performanceand not every audience understands or appreciates it. In Age of Cage, author Keith Phipps walks his readers through Cage’s entire career and puts his acting choices, and films, in context with what was happening in Hollywood, the film industry, and western culture along the way. Even without delving two deeply into Cage’s private life (five marriages) and, oftentimes highly publicized personal quirks (tax issues, buying castles and haunted houses), the book contextualizes the un-graspable, unhinged genius of an actor whose life’s work is so vast, varied, and singular it becomes difficult to truly comprehend the mind behind the madness without a roadmap of the larger picture. Nick Cage to acting is what freestyle jazz is to music, just don’t call it over the top.

The Age of Cage book’s release date was timed to coincide with this meta-thriller/bromance instant classic that sees Cage playing himself (or a least an overworking, insecure version of himself continually flipping between self-aggrandizing and self-despair) who takes a gig as a paid guest at a rich super-fan’s birthday party. While suddenly stumbling into a very Cage-esque thriller crime, or titular hero also forges a deep freindship and revitalizes his career (not that he ever went anywhere). Pedro Pascal (Narcos, Mandalorian) shines as the Superfan inside all of us and Cage deftly walks the line of self-parody and brilliance like only he can, fielding references to Captain Corelli’s Mandolin with just as much gravitas as “not the bees!” Praised by critics & ignored by theatre audiences, this absolute gem is now available on streaming services and is my kid’s favourite move of the year.

And here you thought The Unbearable Weight of Massive Talent was super “meta.” Tasked with the unenviable task of adapting Susan Orleans’ best-selling non-fiction book The Orchid Thief into a screenplay, writer Charlie Kaufman (Being John Malkovich, Eternal Sunshine of a Spotless Mind) turned his struggles with writer’s block into the basis of his screenplay. Shattering the fourth wall by putting not only himself, but also a fictional twin brother into the script, a love story in which NYC intelligentsia figure Orleans falls for the subject of her book, a Florida swamper played by Chris Cooper. Knowing they needed an actor who not only had the chops to share screentime with Cooper and Meryl Frickin’ Streep, but who could also play the twin Kaufman borthers (one endearinly overconfident, the other crippled by self doubt) the filmmakers turned, naturally, to Cage. And shit martha does he ever deliver. This is one of the best films of the millennium.

For a while there, when it had been a minute since Nic Cage had achieved sustained box office success and GIFs and memes were coming of age, there was a snide term going around: to go “Full Cage” meant be doing too much or pushing too far past the boundaries for comfort. And then Mandy came out.

Set in “1983 AD,” Mandy stars Cage a logger who lives in semi-isolation with his awesome girlfriend, Mandy (Andrea Riseborough), who mostly just wears kick-ass rock shirts, read fantasy novels and, unluckily on day, catches the eye of Jeremiah Sand, the leader of a drug-fueled cult of 60s-style “Jesus freaks.”

Cosmatos’ pacing is almost Kurosawa-ianly laid back (the title of the movie doesn’t appear until almost an hour in), but all that time he takes setting up the characters pays off huge in the end.

Without giving too much away, Mandy is basically the ultimate midnight, grindhouse cult film with a heavy subtheme about duelling masculinity, alienation, and the rage that endlessly flows just beneath the surface of love, life and humanity. Steeped in colour washes, camera Mandy watches as if Heavy Metal magazine, They Call Her One Eye, and 2001: A Space Odyssey all took acid in the back of a 1979 van with a mural of a chick with a laser gun fighting a dragon on the moon painted on the side. Aka: one of the best films ever and anything less than “full Cage” would have sunk the entire ship.

Taking it back to early-career Cage! For their second feature film, the Coen Bros wanted a feel good, mad-cap comedy that felt as much 1940s Looney Tunes as it did 1980s Hollywood. Cage stars as wild-haired convenience-store-robber-turned-husband who kidnaps a baby from a rich family recently blessed with quintuplets as a gift for his wife, who can’t conceive. Sharing the screen with legends-to-be like Holly Hunter, John Goodman, and Frances McDormand, Cage shines in his first true leading role, even if he did have a penchant for giving the Coens advice on how they should make their movie (which they promptly ignored, but never got around to working with Cage again either).

Greatest movie premise ever: there’s a good guy and a bad guy, and they swap faces. And it’s even better than it sounds! John Travolta deserves as much recognition as Cage here, as they both nail it acting like the other actor acting his character in one of the best shoot-em-ups of the 90s. The recurring theme on this list is Cage is at his best in layered roles where his versatility can elevate the performance, his co-stars, and the whole damn movie.

Not a super uplifting or rewatchable story (dude goes to Vegas to drink himself to death), this one is notable for two reasons: 1. Cage won his Best Actor Oscar here. 2. Elizabeth Shue is the most beautiful actress of her generation and her take on the “hooker with a heart of gold” cliché was so nuanced and fresh Nic wouldn’t have gotten the statue without her.

Sure sure, Wild at Heart didn’t make the list. Instead of moaning about it just go make your own list—there are like 100 more Cage films to choose from.