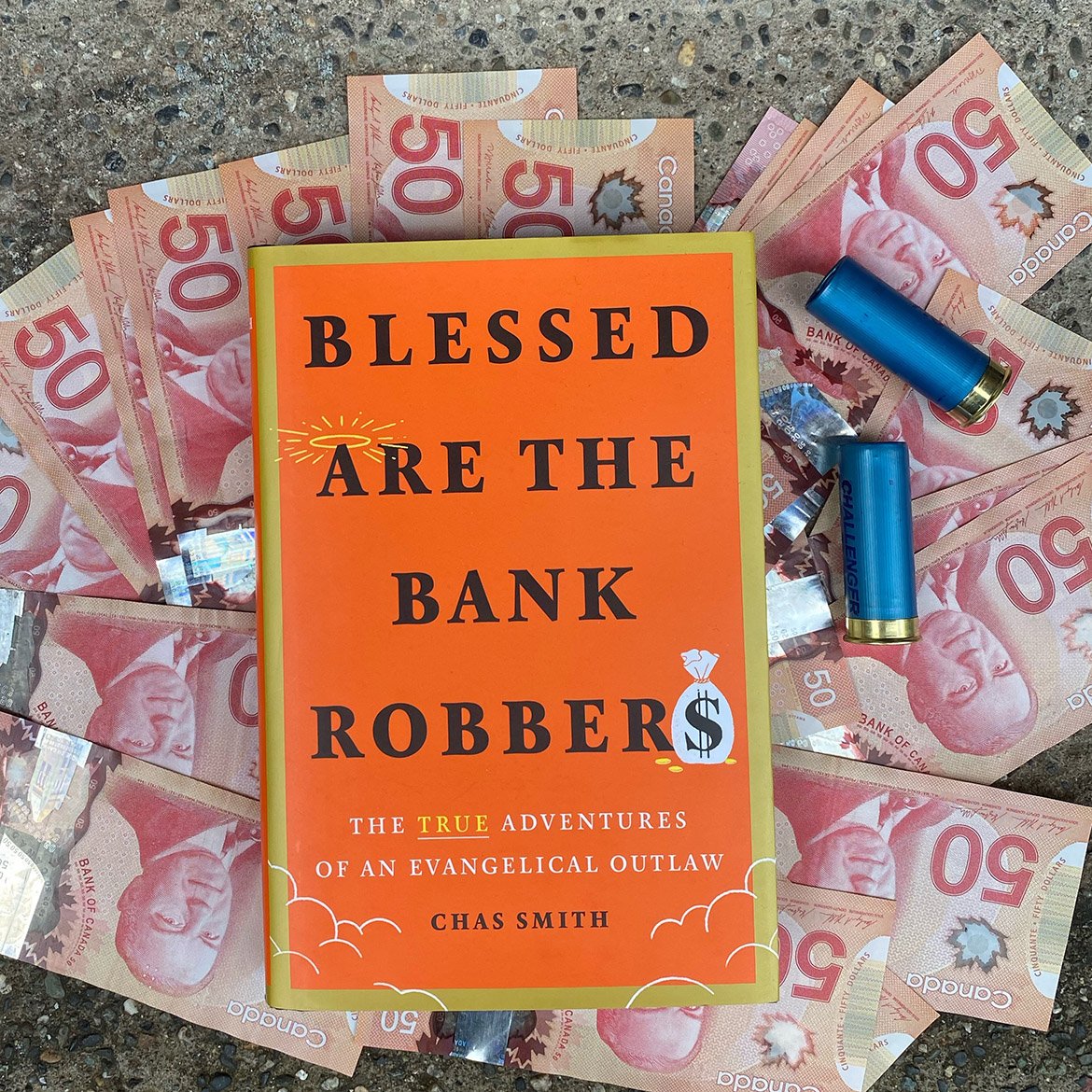 Blessed Are The Bank Robbers: The True Adventures of an Evangelical Outlaw
By Chas Smith

Chas Smith is pretty singular in the world of contemporary long-form journalism. He has deep roots are as a foreign correspondent in no-fuckin’-around locales like Yemen, Somalia, Syria, Lebanon, and Columbia. So, it’s not surprising he had absolutely no problem taking the piss out of people and ruffling anyone and everyone’s feathers (particularly if they take themselves, or anything too seriously) in his original career, as a surf journalist.

These days Smith writes books, pretty fucking good ones, with a call-it-like-it-really-actually-is mentality. His last two books delved into the history of violent localism on Oahu’s North Shore in Welcome to Paradise, Now Go To Hell, before shifting gears into a sort of absurdist dark-comedy sensationalism with Cocaine + Surfing: A Sordid History of Surfing’s Greatest Love Affair.

Both are excellent reads, with sharp prose, jump-scare comedy, and cutting commentary, but in a conversation on the Standing Sideways action sports podcast back in May of 2020, Smith admits he had grown somewhat weary of his rough-edged literary persona

“Watching people get angry, I just wanted to push that more and more,” he said. “Anything to cause a conversation, that is what intrigued me…getting someone so riled up that they would write I HATE CHAS SMITH on a message board— I loved chasing that visceral reaction.”

But Smith admits the fun has dwindled (the rise of actual troll culture didn’t help) and, after completing three books that were very much about himself, or at least his persona, moving through the narratives he wanted to tell, he felt the desire to shift gears.

“I’ve become so sick of myself,” he admitted. “Three books, all this me, me, me…I would like to evolve into something better. I don’t know what it is, but I am sick of Chas Smith. It’s time for me to evolve.”

What that evolution ended up producing is Blessed Are The Bank Robbers, where Smith pulls off a nifty trick—instead of putting himself front and centre in his story, he makes the whole story about his childhood, and his family (and it’s crazy what he’s been sitting on all this time!)

Smith grew up deeply enmeshed in the evangelical Christian empire that mushroomed out California in the late 1960s. And amidst the megachurch pastors and super famous missionaries he called kin, one cousin—Danny Courson—takes centre stage. Because he dipped out of God’s (and the family’s) all-see gaze for a moment and started robbing banks. Shitloads of banks, like 19 banks in six weeks.

The challenge for Smith is how he meshes two very different worlds into a story his readers will want to follow, because most fans of bank robbery probably don’t give a hoot about the inner workings of Evangelical Christian anything (last time anyone checked bank robbing was a sin). And from where I sit, Smith’s chapters on the history of American bank robbery and the details of his cousin’s ballsy escapades certainly ring closer to my heart (finally a bank robber who escapes by tearing through the woods on a mountain bike!!) than the differences in opinion and doctrine between Catholics and early (and late) Protestants, but for the most part Smith tugs the reader along with his sharp (if less acerbic) sense of pace, character, and humanity. Is this a Chas Smith book with Chas Smith in it? Certainly, but it’s not the Chas Smith you expect. And I’m here for it.

Reading this book reminded me i haven’t posted a story about the best bank robbing book ever, Jackrabbit Parole, written by the late Stephen Reid and based on his own early life and escapades. You should go read that book right now.