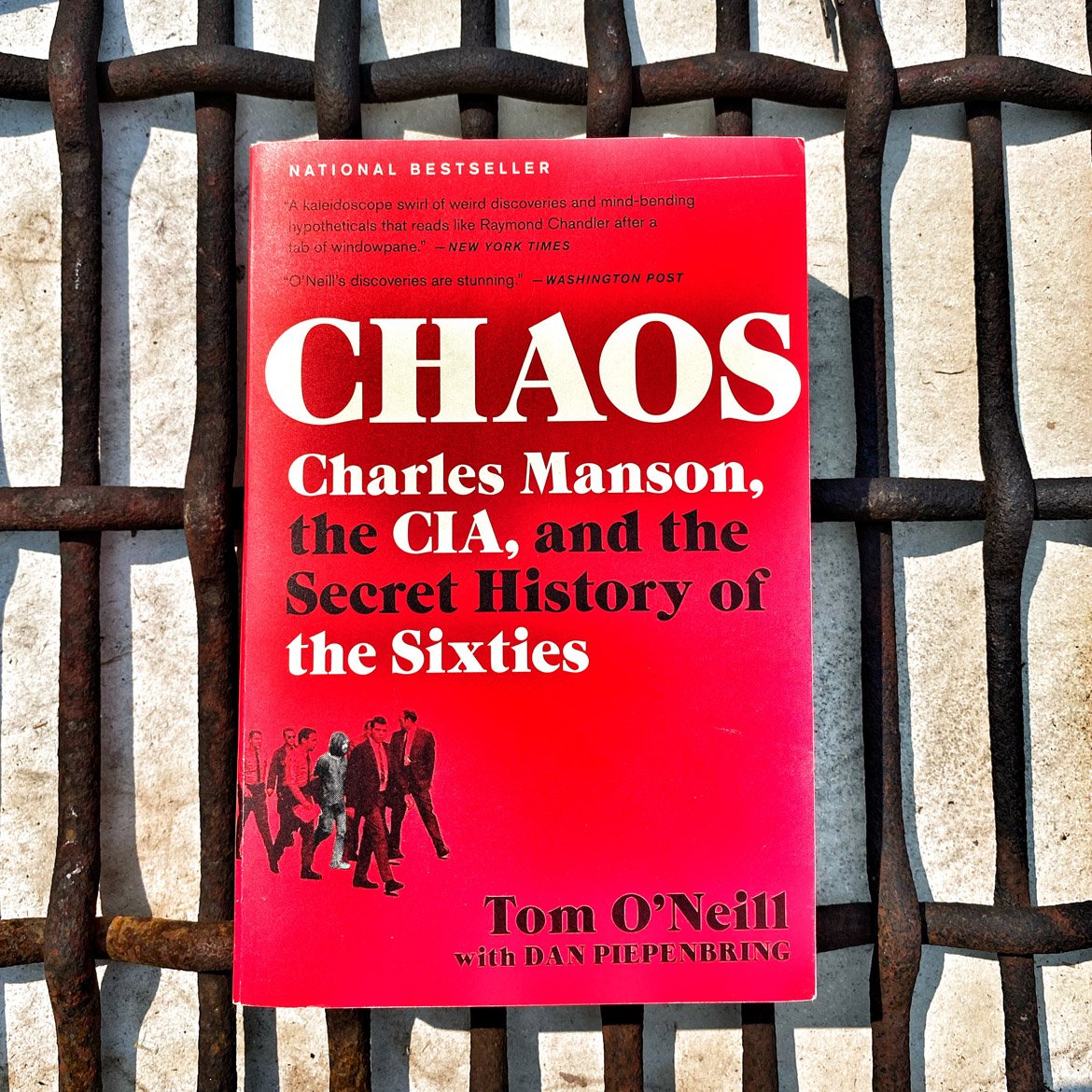 Music: Party at the Moon Tower

Chaos: Charles Manson, the CIA, and the Secret History of the Sixties by Tom O’Neill with Dan Piepenbring

What if Charles Manson was working with the CIA to simultaneously undermine the hippie/peace movement with violence, while also contributing intel to the super-covert MK ULTRA project researching the viability of LSD as a mind-control agent? Sounds out there, but maybe not…

Tom O’Neill started writing this book in 1999, after getting an assignment from Premiere Magazine to gauge the lasting effects of the brutal Manson Family Murders in Hollywood 30 years later. Digging into the “leftover pieces” of the crime, O’Neill was drawn to Helter Skelter author (and chief prosecutor in the Tate-LaBianca murders) Vincent Bugliosi.

Bugliosi, in his prosecution and book, summed up the murders as Manson’s attempt to start a race war, usher in some kind of apocalyptic reckoning, and maybe get back at a record producer for not helping him become a rock star. It didn’t long for O’Neill to notice that the general vibe around Hollywood, including the local cops, was that there was more to it than that. So he kept digging, blew multiple deadlines for his original assignment, and opened a Pandora’s box of paranoia, overlooked evidence, and more than a few things about the Manson case that just didn’t add up, including a few mysterious characters that everyone remembers seeing, but no one really knows why.

Twenty years and a co-writer later, O’Neill’s book definitely opens up more mysteries than it solves. But there is hard, documented evidence that should have played a role in the Manson trials, that didn’t. Not the least of which is that Manson should have been in jail for Parole violation the entire time, but somehow kept slipping away, or being released, from normal judicial procedures.

This book is a wormhole, O’Neill went down one and its really easy for his story to send us readers down multiple others (MK ULTRA and CIA Honeypot brothels are just a few examples). Some of the potential truths laid out here are grim to consider—who watches the watchmen? If those meant to protect us would allow, would assist, psychotic narcissists to murder innocents back in 1969, how far are they willing to go now?

The ultimate truth is that regardless of exactly what happened, nothing will bring back the lives lost, and there will never really be justice for the loss of Leno and Rosemary LaBianca, Abigail Folger, Wojciech Frykowski, Steven Parent, Jay, Sebring, or Sharon Tate and her unborn son. This is not an uplifting read, but it’s definitely pulls you into both the chaos of those tragic times in 1969, and one writer’s attempts to make sense of them.

Movie: The Dick with the Long Face

Music: Party at the Moon Tower