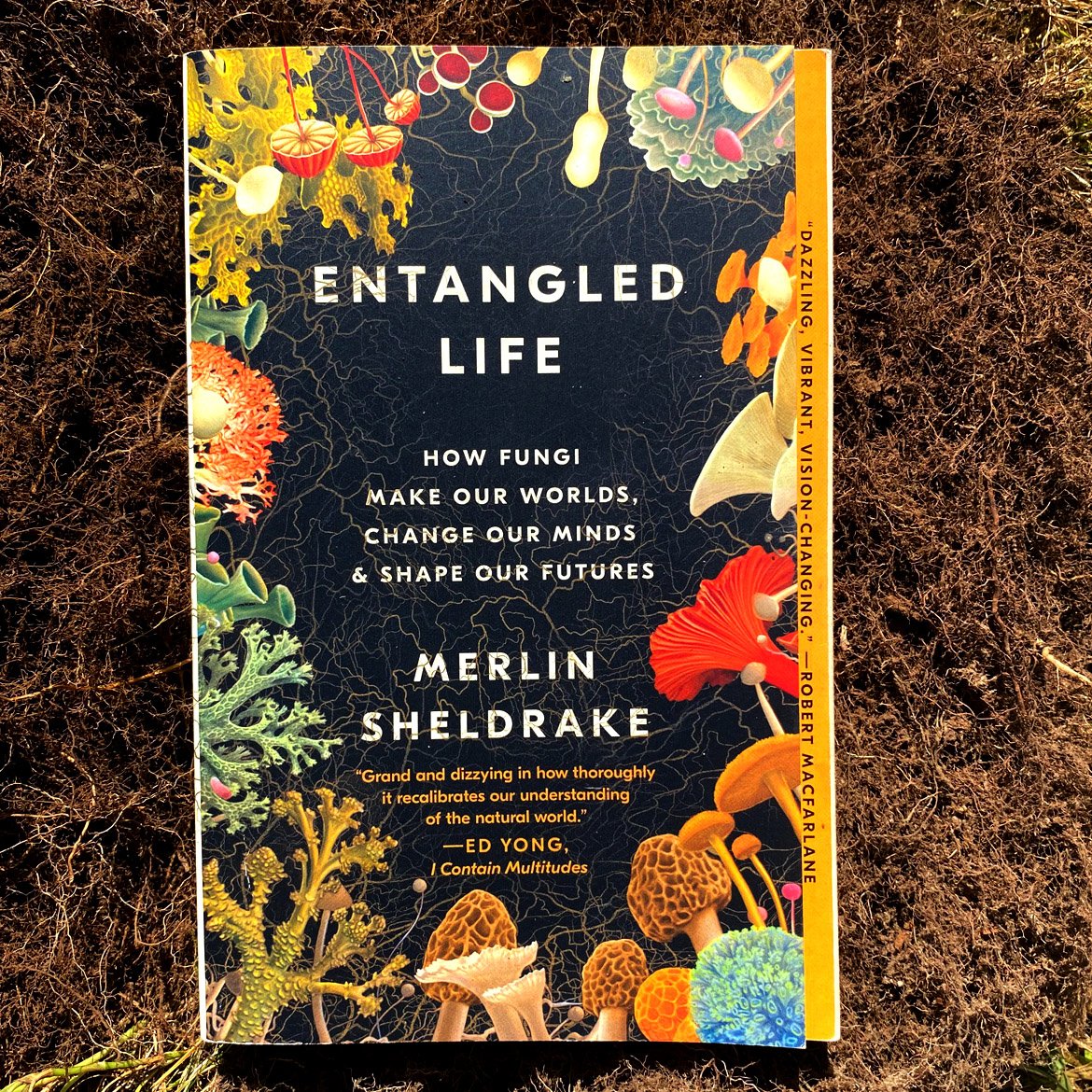 Entangled Life: How Fungi Make Our Worlds, Change Our Minds & Shape Our Futures
by Merlin Sheldrake

“My childhood superheroes weren’t Marvel characters,” explains Entangled Life author Merlin Sheldrake (his real name!!) in an interview with author Robert Macfarlane. “They were lichens and fungi. Fungi and lichen annihilate our categories of gender. They reshape our ideas of community and cooperation. They screw up our hereditary model of evolutionary descent. They utterly liquidate our notions of time. Lichens can crumble rocks into dust with terrifying acids. Fungi can exude massively powerful enzymes outside their bodies. They’re the biggest organisms in the world and among the oldest. They’re world-makers and world-breakers. What’s more superhero than that?”

And that is the kind of attitude you want in a book about one of the most complex and understudied arenas of natural science. Sheldrake writes with obvious passion for his subject matter but, equally important, a keen desire to share his ideas, insights, and discoveries in a digestible way. (And he backs that up with a Ph.D in tropical ecology from Cambridge University and a background in plant sciences, microbiology, ecology, and the history and philosophy of science.)

Reading Entangled Life is like repeatedly getting smacked in the head with a shovel blade full of knowledge…and loving it.

Nature is an essential component of a healthy happy life. And most of us are not getting enough of it (except for Bushy, he is doing just fine). So for anyone who’s more keen on a walk in the woods over a weekend Netflix-binge, this meatiest part of this book focuses on the universe beneath our feet—mycorrhizal fungi networks.

In the 1990s, Canadian forest ecologist Suzanne Simard observed some of the earliest of these mycelium networks while investigating the link between mature birch trees and sapling Douglas firs in British Columbia cut blocks. Where the birch were originally considered “weeds” that would steal nutrients and sunlight from the “crop” firs, Simard and her colleagues discovered that in fact the opposite was true. Trees and plants, regardless of species, can aid and assist each through complex mycorrhizal fungi networks woven into the roots of a forest or meadow are capable of transferring water, carbon, and nitrogen. They can even share chemicals that warn of pest attacks.

In Entangled Life, Sheldrake digs deeper, builds on these findings, and comes up with more incredible examples of interconnectivity.  Some plants, such as the Ghost Pipe flower, have even evolved without the ability to photosynthesize—they get all their energy through mycorrhizal fungi networks entrenched in the ecosystem around them.  Simard called it “the Wood Wide Web” and the craziest part, these shared fungal networks look and act very much like the internet or other human-constructed networks, with older trees and plants hosting the most connections similar to high traffic online “nodes” like Google, Twitter, or (used to be) Facebook.

And shit gets even cooler from there. Sheldrake shines new light on a number of studies on how mushrooms and fungi are solving any number of pressing world issues. Slime moulds can (quickly) learn to efficiently navigate complex street map-replicas (like New York City). Ganoderma Pleurotus fungi has been trained to digest cigarette butts and fruit into reishi mushrooms. Other strains have been taught to degrade pesticides, synthetic dyes, diapers, crude oil, TNT, dimethyl methlphosphonate (a key component of the deadly VX gas Saddam Hussein deployed in the Iran-Iraq war). The age of mycoremediation is here, and “mushrooms” might save the world.

Or destroy it. I don’t want to spoil it by naming the book but there is a popular zombie novel out there where it isn’t a virus or nuclear space dust that infects humanity and transforms us into braindead killers, it’s a fungus that highjacks our nervous system. AND THERE’S ALREADY A REAL-LIFE EXAMPLE OF THAT HAPPENING! Ophiocordyceps unilateralis, aka: Zombie Ant Fungus, will take over a living ant’s nervous system and force it to climb to the highest place it can, bite onto whatever leaf or twig is there, and die. All so the fungus can shoot it’s spores from a higher elevation in order to better spread them around. Check the video!!!

Reading Entangled Life is like repeatedly getting smacked in the head with a shovel blade full of knowledge… and loving it. Plus, there’s even a chapter on Psilocybin (magic mushrooms). Speaking of superheroes and saving the world, I most certainly lack the scientific credentials (or the fucking incredible name) of Merlin Sheldrake, but I’ve got plenty of anecdotal evidence that eating psilocybin and going for a walk in the rainforest is the first step to world peace and justice for all. Prove me wrong!