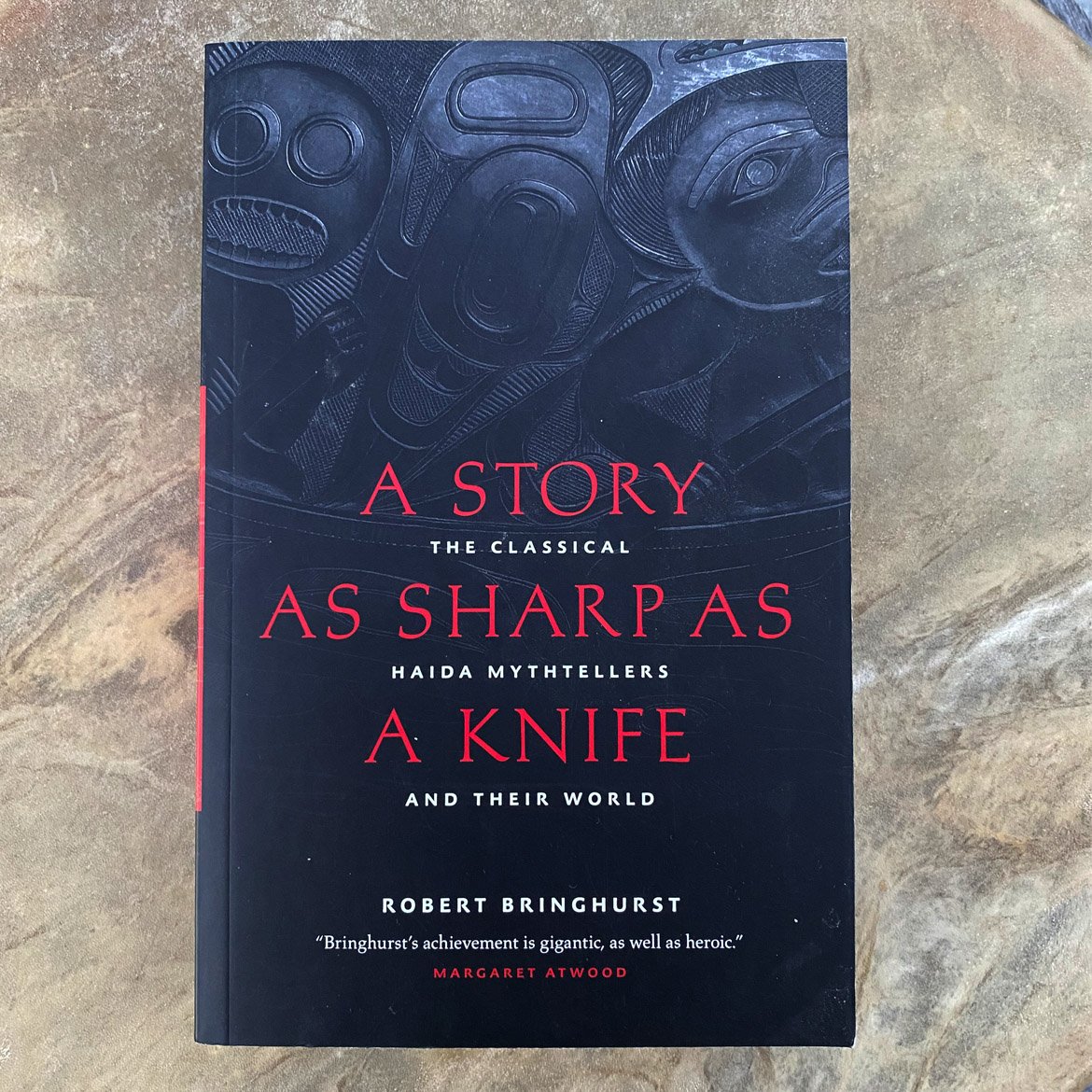 A Story As Sharp As A Knife: by Robert Bringhurst

The reason you have likely never seen any text like that before is because it is the language of the Haida people. Or rather, it’s the phonetically written iteration of their language, which has existed almost exclusively in oral form since time immemorial.

Haida Gwaii, home to the Haida First Nations, is an incredibly rich and beautiful archipelago of islands 100+km off the north coast of what is now British Columbia. Largely bypassed by last Ice Age, archeologists have found evidence of human existence on the islands dating back over 13,000 years. Those words above (lines of verse, really) were transcribed in September of 1900 from a classical Haida myth dictated by a 73-year-old Haida elder named Skaay of the family Qquuna Qiighawaay. Skaay could neither read nor write.

The transcriber was an American linguist named John Reed Swanton, who was working with a young bilingual Haida with the Christian name of Henry Moody.  As Skaay spoke, Moody—acting as translator, tutor, and guide—would repeat each line loudly and slowly to prove to Skaay that he had heard correctly and to ensure Swanton had time to record it properly in the Haida language, which he was somewhat familiar with and getting more so by the day.

Over the course of three and a half years, Swanton and Moody worked with a handful of Haida-speaking storytellers and transferred a number of classical Haida myths, stories, songs, and histories from the oral tradition into a written one. In the process, they captured one of the world’s richest oral mythologies and recorded it as literature. And that’s pretty kick-ass because in the early 1900s it was incredibly rare for any colonial person or institution to give that level of care or attention to any Indigenous language or myth. Many legends were recorded but, even decades later, nearly all were filtered through the ears/mind/presumptions of the recorder.

In the 1970s, Canadian poet/cultural historian Robert Bringhurst dove back into Swanton and Moody’s invaluable Haida-language transcriptions and, after almost 30 years of study and 12 years of dedicated toil, he produced this book—A Story as Sharp as a Knife. It’s a glimpse into the exquisite universe of Haida storytelling and poetry, but also a swansong to everything that print and literature cannot contain. An homage to what has been lost.

And make no mistake, much more has been lost than saved. In 1774, the time of European contact, the Islands of the Haida people were home to anywhere from 12,000-30,000 people—estimates vary. When Swanton stepped off the Princess Louise steamship and landed in Skidegate, that number was somewhere between 350-1000. Let that settle in: imagine scrolling through your phone and deleting 9 out of every ten contacts—90% of your friends/family/colleagues— in one fell swoop. That’s what smallpox did to the Haida in the 1800s. Those few who survived were then further attacked by other horrible diseases like typhoid, measles, syphilis, Christianity, and colonialism. In an oral culture like that of the Haida, that any stories at all survived such prolonged devastation and genocide is incredible, and something we should all be grateful for.

Certainly, there are living Haida still telling these stories, but Skaay, Ghandl, and the other poets in the book are masters from a different era. Bringhurst is quick to point out that oral literature contains nuances and performative elements that can never be captured in text—similar to how sheet music fails to capture the improvisational verve of jazz, or the blue-note wails of a master Blues vocalist. The poets in his book were performers in their time, and their stories, though translated dutifully, will never read the way they were once seen and heard back in the day.

But it’s still an incredible read. Bringhurst accompanies his translations of the stories transcribed over 100 years prior with deeply researched history and crackling anthropological insight. So much so that Margaret Atwood calls this book “One of those works that rearranges the inside of your head — a profound meditation on the nature of oral poetry and myth, and on the habits of thought and feeling that inform them.”

And as much as this book is about the Haida poets and their stories—of the Dogfish woman, the man who married a goose, the one they put in place, and so many more—it is also about stories themselves, about myths. “A myth is a story,” Bringhurst writes, “and it is a story that insistently recurs: a piece of timelessness caught in an eddy in narrative time.”

And, perhaps most strikingly, it’s a book about language itself (which will appeal to the cunning linguist in all of us.) Early in his 107 pages of notes, appendixes and bibliographies* Bringhurst lays it all out nicely:

“Language is a vehicle of knowledge and a key to the interlocking prisons of society and time. When it’s written down, it can let me hear from people who knew things I don’t know and saw things I can’t see because they lived in another time, in another world. Nothing language does seems more wonderful to me than that.”

And as I realize, as more of us realize, just how many Indigenous communities and cultures have had their language vandalized, stolen, and destroyed, a book like this becomes all the more important. For what it managed to save from the past, certainly… but also for what it can help us create in the future.

Footnote: * Yes I am totally starting to appreciate, and be drawn to, books that have a shitload of pages remaining after the end of “the book.” The Body had 75, so this one is in the lead, but there’s a fungi book coming down the pipe that might give it a good run.

I started writing this one on June 21, Indigenous Peoples Day here in Canada. I finished it on June 24, the day news broke that the bodies of 751 more Indigenous Children had been discovered in unmarked graves in the yard of a former State-sponsored, Church-run Residential School in Saskatchewan. And “discovered” isn’t even really the right word, from the late 1800s to 1997 over 100,000 Indigenous children were stolen from their families and held in these Residential Schools as part of a program to assimilate them into Canadian culture. Many, perhaps all, were abused, tortured, starved, and even murdered. Survivors of these schools and families whose kids simply disappeared have been speaking about these horrors for a long time—few Canadians, including myself, truly ever listened. This is not a discovery of bodies, it is a confirmation or what was known and wilfully ignored. And the grossest part is there will be a lot more to come. I don’t have any answers, i don’t even know what the next step is. Clean drinking water for the Indigenous communities that don’t have any yet would be a nice start though…

Learn: For individuals who want to do something, The University of Alberta is offering a Free 12-lesson Open Online Course called “Indigenous Canada” that explores Indigenous histories and contemporary issues in Canada.

Shut Down: Any of your friends, acquaintances, or family, (a lot of us have that one contrarian douchey relative) that try to hijack this story and twist it to avoid or lessen the horror like that douchbag catholic priest in Ontario did this week. Don’t stand quietly by, shut those fuckers down. Ensuring the right story is told over time is essential here, because it’s been suppressed for far too long.