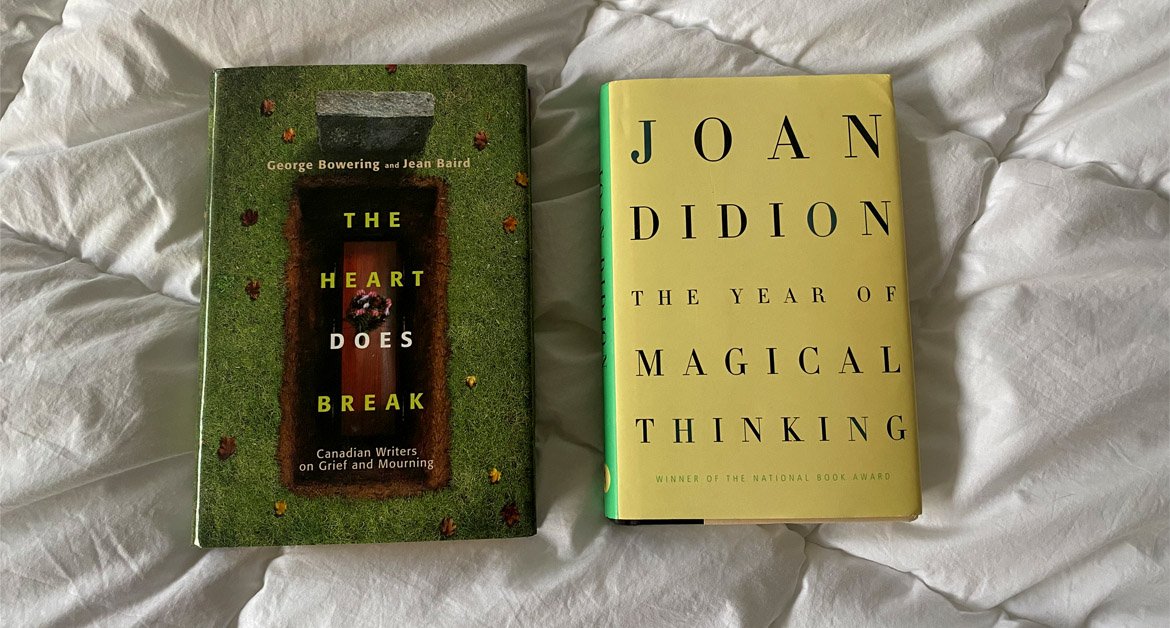 I lose a lot of friends. We live in the mountains and partake in activities that often have us tiptoeing along the edge, peering into a swirling abyss of risk and danger in pursuit of…thrills? Flow state? Dopamine addiction? Some kind of higher vibration of existence?

Who knows why anyone does anything, really? But the mountains give, and the mountains take away. Throw in a few car wrecks, suicides, a murder (unproven), and way too much cancer, and the result has been far more funerals than any person my age should ever have had to attend (and speak at).

It always stings—losing someone, anyone—and when it happens, we need a soft place to land. For me, it’s these books.

The Heart Does Break is a compilation of essays on grief and loss. Rather than counselling or advice or life-coach malarky, this is just a collection of stories—real human stories— from some of Canada’s lesser-known-but-most-talented writers.

“After the diagnosis he wrote heroically about beating this thing, how he was responding to the chemo,” writes Stephen Reid of his old friend and bank-robbing partner Paddy Mitchell in The Art of Dying in Prison. “But every month the envelopes grew thinner. Then they became more infrequent. It was as if he were slipping away from me on page at a time.”

Reid (who himself crossed over in 2018) and Mitchell were the iconic leaders of the notorious Stopwatch Gang, a crew who reportedly stole upwards of $15 million from more than 140 banks (and at least one airport hangar full of gold bars) in the 1970s and 80s.

“He knew he wasn’t going to throw some knotted sheets over the wall or tunnel his way out of this one,” Reid writes of the final letter he received from Mitchell, a small note jotted on yellow, prison-issued paper. “The letter ended with, ‘We’ve had a life, haven’t we? God bless. Your friend…’”

Perhaps the old saying is true—misery loves company—and reading the pain and grief of others helps stave off the futile loneliness of my own. Containing twenty stories about mourning everything from the death of a parent, a child, a lover, or seven miscarried children, The Heart Does Break is ultimately about endurance. It helps us (or me at least) reflect on what mattered in life, and what matters now, and softly ushers in the sad reminder that, as Brian Brett writes in his piece about losing his father, “Grief is what finds us, mortals that we be. Mourning is what we learn to do.”

Grief finds us, and it also—at least according to Joan Didion—pushes into a state of prolonged, barely perceptible state of mental insanity. In The Year of Magical Thinking, Didion carries us along with her as she comes to terms with the sudden death of her husband while simultaneously dealing (or attempting to deal) with a prolonged and mysterious illness affecting her daughter.

“Life changes fast,” Didion writes. “Life changes in an instant. You sit down to dinner and life as you know it ends.”

Over the course of 227 pages, Didion clings to the balance her own mental reality while also knowing that she’s right there teetering on edge (sometimes falling off) and that it’s natural and ok to be there. “I realized that for the time being I could trust myself to present a coherent face to the world.”

The emotions, universal and unavoidable in the wake of tragedy and grief, are rarely so eloquently described. Didion is the strongest writer I have ever read. In this book, that strength is in her ability to recognize and embrace her own weakness, then describe it in a way the rest of us can understand and relate to, even as we plummet into the darkness of our own pain.

Life changes in an instant…but we’re never as alone as it feels.