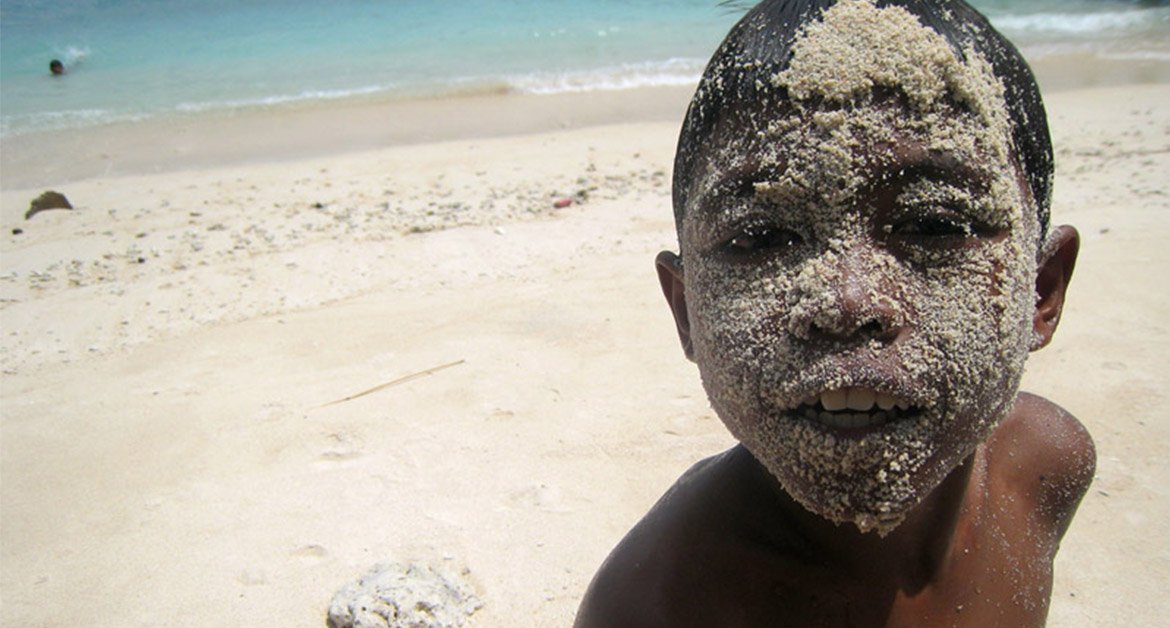 The beach sand on Gili Trawangan is white hot and feels like someone is running a razor along the fleshy parts between the toe and the rest of the foot. Across the water puffy clouds gather around the volcano cone while sparkels dance across the water. At first glance it’s easy to mistake the shimmering water for reflection but in reality the cascading diamond gleam come from the frolicking of schools of leaping fish. Time is meaningless, space is everywhere.

This is going to be the greatest day ever.

The best way to arrive someplace new is by boat. It’s the anticipation of watching your destination slowly grow closer and then stepping ashore and into adventure.

Boat is the only way to get to Gili Trawangan, the largest of three sand-ringed nipples of land poking from the sea just off the north coast of Lombok, Indonesia.

Trawangan, or Gili T to the backpacker crowd who’ve been going there for decades, is known for world-class scuba diving and a super mellow vibe. There are no motorized vehicles allowed on the island — its few dirt streets are populated by cimodo, single-horse drawn buggies. No dogs allowed either, which means the place is crawling with cats their tails kinked so that they look like they’ve been slammed in a door  (it’s a genetic glitch brought on by all the inbreeding).

With the fishing industry on the decline and no real options to farm on an island just 30 metres high and about 4 koilometres around, tourism is the only real industry left for the 800 residents of Gili T. Drinking and eating spots fuel much of the economy, apparently there is a small surf spot that “sometimes” breaks, but for the most part, the Gilis are a dive destination.

Time is meaningless, space is everywhere.

Five reputable dive schools pepper the main, the only, street offering all sorts of instruction and trips. (A good way to suss out a dive operation is to ask where the nearest decompression chamber is. If they don’t know you better shop around.)

The coral reefs and clear, strong-currented waters surrounding the Gilis make for excellent drift diving and are home to walls, wrecks, turtles, reef sharks, stingrays, eels, octopus and more colourful fish than your dentist’s aquarium. Snorkeling is cheaper and almost as good and boats can be chartered to explore the smaller, mellower Gili Air and Gili Meno.

With huge diesel generators providing power to the entire island the Gili locals will never be considered eco-sustainable, but they do their part. As all provisions, even drinking water, must be shipped in via boat, all garbage has to go the same way. Everyone is encouraged, via posted signs and word of mouth, to minimize their garbage and reuse plastic water bottles, which can be refilled for a fraction of the cost of a new one. Rather than beg, local kids will clean up the beaches and “cash in” their garbage for rupiah, the local currency.

Thankfully, “progress” and development move along pretty slowly on the Gilis but since I was there in 2009 more upscale lodges, villas, and solar powered eco-retreats have sprung up on Gili T, stripping the island of some of its backpacker street cred, but also bolstering the Gili Eco Trust, a local environmental group focusing on reef restoration. By all reports Gili Meno and Air remain as mellow as ever.

The socio-political situation of Gili Trawangan is unique and pretty kick-ass — the whole place is run by an elected “Island Leader” (members of island’s oldest families usually win) and that’s it. Anyone who commits a crime, brings a dog ashore, or screws up in any way gets booted off the island and that’s that, problem solved. Thanks to this there is no need for police and little or no crime. No one has to “stay with the stuff” at the beach because the islanders all know and look after each other and understand tourism is the only game in town.

Gili Trawangan is predominantly Muslim, so women should only wear bikinis on the beach, not in town. The locals never say anything but astute observers will notice that it makes them uncomfortable.

When the cops do show up on Gili T, they have to instantly report to the Island Leader so people can keep and eye on them. Crazy right? Crazy awesome. Lombok cops are notorious for their active role in the drug trade and the people of the Gilis know that hard drugs and crime go hand in hand.

No cops can mean a lot of things to a lot of people, but to the people of Gili Trawangan it apparently means being entrepreneurial and selling hallucinatory “magic” mushrooms to any man, woman or teenager who wants them (and maybe some kids.) Signs in the street advertise trips to “heaven and back” or “to the moon” as openly and creatively as possible, yet the actual transactions are more discreet — shakes, tea or omelettes ordered with hushed tones and sideways glances.   Is it legal? Who knows? Doing drugs in any foreign country is usually risky and/or stupidly not worth it. The Gilis are still part of Indonesia, where harsh drug sentences range from 20 years to Death Penalty…. but no cops means no cops and besides, mushrooms are food, aren’t they? The tea tastes woody and comes on fast and strong.

The water is perfect. The pebbles and worn coral feel like chilled marbles underfoot. More fish — leaping schools of minnows, flying fish sailing through the channel. Locals wave from dugout canoe-boats outfitted with bamboo outriggers. The sky is so blue, the trees so green.

“You look so red,” my girlfriend says. “Like really, really pink and red, did you put on sunscreen?”

“Yeah, just before we…. Shit, how long do you think we’ve been out here?”

Four hours. Worst sunburn of my life. Best day ever.

This one is super old, before the Gilis got kinda played, and i wrote it for Whistler’s Pique Newsmagazine because in those days you’d get $75 for a travel story (words & photos) and that goes to show you should give your pocket change to your writer friends. But after it was printed someone sent a letter to the paper praising how I “perfectly captured the truth about reality” or some such compliment. And i was like, “yeah, mushrooms are awesome.”