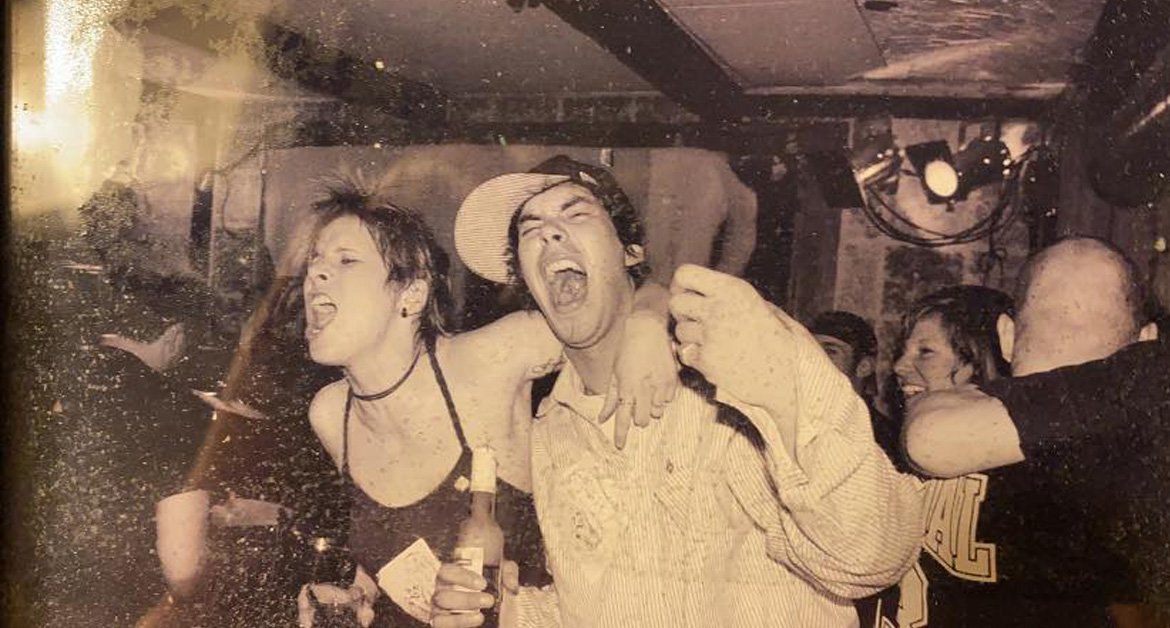 The Last Days of The Boot Pub

*This story originally appeared in UpDown Magazine in March 2006*

It’s quarter past ten at night in the Boot Pub and onstage the girl with the rainbow scarf just slid her panties down to her knees. A roar of applause rips through the capacity crowd of high-fivin’ white guys. Understandable, considering five minutes ago Karé, the rainbow scarf girl, was fully clothed and sipping a drink at the back of the room before suddenly being hauled into the spotlights by two pixie-like hype girls in garter belts and push-up bras. It’s amateur night at the “Boot Ballet”, an evening of craned necks and slack jaws with a $500 top prize going to whoever has the (figurative) balls to get on stage and shake what their mommas gave them.

“It was liberating,” Karé later tells me, smiling as two more young local girls, best-best friends no doubt, jump on stage and start to grope each other. Screams, cheers and the odd obscenity float like ships on a sea of testosterone. It’s the Boot, after all, an indestructible bomb-shelter of a room built specifically for savage nights like this. I order another drink and sneak a bit closer to the stage. Amateur night at the Boot, any night actually, is the sort of thing you have to enjoy while you can because come the end of April, this 39-year-old piece of Whistler history will close it’s doors for the last time.

Originally built in the late 60’s as a sort of mini-resort, The Ski Boot Motel was Whistler’s first true ski bum establishment. For $5/night people could stay for weeks at time, skiing every day, eating in the restaurant, and drinking the evenings away in the beer parlour, a neighbourhood pub-like room populated almost solely by construction workers and other surly types.

“I’ve been here since 1993,” says Boot manager Paul McNaught. “I started off doing the renovations, then ran the restaurant for a few years and I’ve been managing ever since.” The renovations included ripping up the beer-soaked red shag carpet, building the bar and transforming the room into a sturdy wooden venue with great acoustics. “We built it with the idea that we wanted a primo sound quality,” says McNaught, ‘and to be able to hold a wild crowd.”

Over the years that ‘primo’ sound quality has lured an incredible number of bands to the Boot. From Whistler- locals like She Stole My Beer to punk legends like the Dayglow Abortions and DOA to Canadian superstars like the Tragically Hip or the Rheostatics.

Except for the Boot Ballet, a 2-or-3-times-a-week dose of B and C circuit strippers, live music has been the Boot’s bread and butter and what separates it from the rest of Whistler’s bars and clubs. Punk Night, showcasing new bands every Sunday, is perhaps the best example of The Boot’s consistency and commitment to live music in Whistler.

“The Boot enjoys a distinct advantage for bringing in bands from out of town,” says Punk Night organizer Lindsay Shedden. “They can offer food, drinks, and a place to stay (at the attached Shoestring lodge) all under one roof. It’s affordable for them” This advantage, and word that the venue is so enjoyable to perform in, means that McNaught and Shedden are able to bring in high quality acts at lower cost. It’s been a winning formula for over thirteen years.

And what’s going happen to Whistler’s longest running independently owned structure after the Boot closes for good? It’s being torn down. The six-acre parcel of land is now owned by Vancouver’s Cressey development. They plan on building 36 employee housing units and 41 market townhomes on the property. “Obviously, you wish you could just leave things as they are,” says David Evans, Cressey Development Manager. “I mean, I’ve had some great nights there just like everyone else, but we have a requirement to build employee housing and when this deal went through there weren’t really any other land options available to us.” Evans adds that he’s working closely with the Whistler Museum and Archives to secure the Boot’s much-deserved place in Whistler’s history. “We’re planning a big community-based event when it all shuts down at the end of April,” he adds. “With family-oriented stuff outside during the day and then bring in some bands at night.”

With the closure looming, will Whistler’s live music scene suffer? “Oh yeah,” says Shedden. We’ll notice an obvious void but there’s hope. It’s not impossible to bring in good acts and venues like the GLC and Garfs are already stepping up. There are lots of empty stages in Whistler and plenty of people who don’t want the live music scene to end, so hopefully they’ll pick up the slack.”

Skip forward to 2:30 pm on a pretty slack afternoon in the Boot. The girl in rainbow scarf is just a memory, a fading glimpse of another epic night in a room that’s seen its share of epic nights. Today, a cluster of local tradesmen shoot pool and drink draft beer while Janine, bartender here for over a decade, deals with a somewhat distinctive crisis. One customer’s dog, a ratty schnauser-looking thing, has just taken a leak on the floor. “I can’t believe it,” the man says apologetically. ‘He’s supposed to be housetrained.”

“There’s a mop somewhere in that back room,” Janine says nonchalantly, “Knock yourself out.” She then offers me a cheap drink and some free popcorn, before elaborating on what makes the Boot a rare and special watering hole in a town full of places to get drunk. “It’s so personal in here,” she says. “It’s like a living room; people are comfortable. You can always see the band, sometimes even meet the band. And every day is so different here, that’s why I’m not bored, even after 15 years.”

As I scan the numerous photos of past performers/musicians lining the Boot’s pockmarked stucco walls I notice two pictures hung behind the bar. They’re shots of deceased Whistler legends Seppo Makinen and John ‘Rabbit’ Hare, both amazing fellows and true examples of what made the Boot, and Whistler, a unique and magical place back in the old days. Janine notices my gaze and a sad look flashes briefly across her usually cheerful face. “I hate that we’re closing,” she says. “ I thought I was going to be on the wall with Rabbit and Seppo. Now where am I gonna die?”

Her sadness, I’m sure, is shared by many long time Whistler residents but the truth is she’ll never die, and neither will The Boot, because both are Whistler legends. And legends, as everyone knows, live forever.

This article was probably among the first four or five freelance gigs I ever got. For sure i was writing my movie column but this point but this was a few months before we started Mountain Life Magazine so i would have been pretty green. UpDown was a sweet mag, sadly they only lasted a year or two.

The Boot is sorely missed in Whistler, for an example of what basically any punk night felt like there, check this vid from 2001

Ode to the Wristwatch