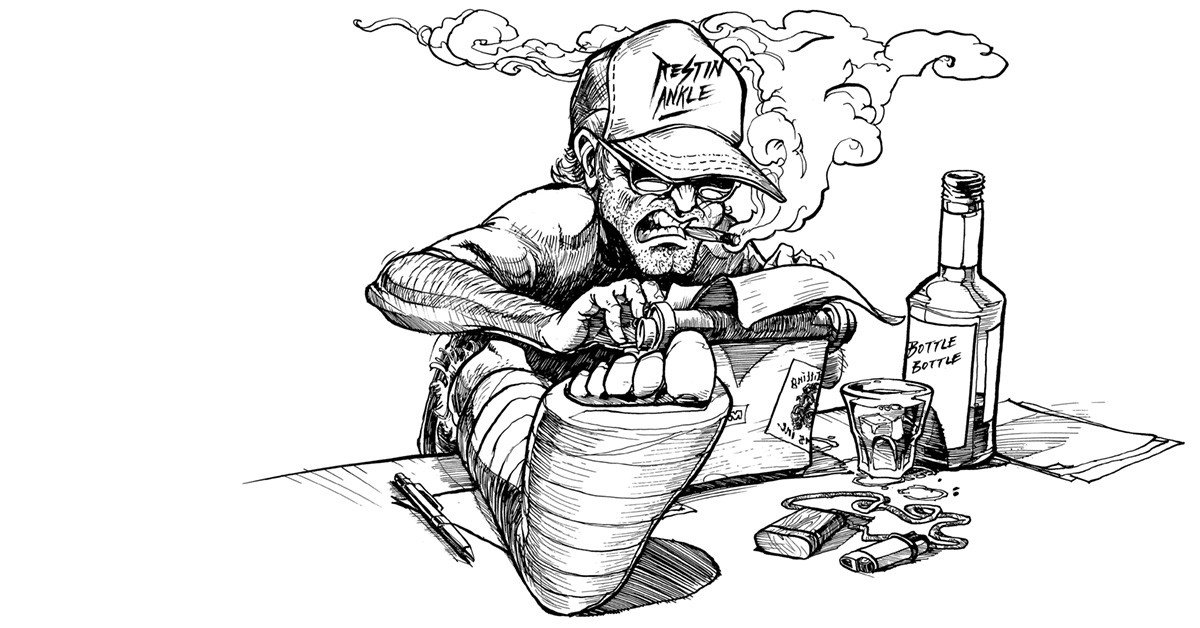 From Fledgling to Fucking Flight

An Asshole’s Ten Tips to Elevate Your Writing

#1      most important is to write all the fucking time.
The good thing about going to writing school is it forces you to pump out up to 10,000+ words a week for four years. And that is really how you get better; practice. Writing’s the same as anything—fucking, skateboarding, ventriloquism—if you don’t do it all the time, you won’t improve.
(The other good thing about writing school is they usually put the writing building out near the theatre building and those theatre kids are freaks in the sack. Annoying the rest of the time though, be wary.)

#2      read a shitload too.
At first you might just write in the same style as what you’re reading (only not as good), but that’s ok. If words and lines and paragraphs and pages are constantly filtering through you, the imitative shit will eventually come out in the lint screen and there will be half a handful of dimes and quarters left in the drum. How long this all takes might be where talent comes in, but if you read and write enough the derivative becomes the inspired-by becomes its own thing.

#3      take the risk.
I am not an expert but if you aren’t at least a little self-conscious to put your work out there, chances are you didn’t try hard enough. All your best writing should have a piece of yourself in it and that can, naturally, freak a person out. Risk is the spice of life (and don’t be afraid to upset your parents or you will never get anywhere).

#4      writing for free is a good way to get confidence at the very beginning and that’s about it.
Forget the promises of “exposure.” You can’t eat exposure nor can you wipe your ass with it—life costs money. If your shit is good enough to publish it’s good enough to pay for—free is not key. Passion projects or stuff for a friend can be okay but working for free is really just fucking yourself and all the other people who are getting paid. Plumbers, strippers, vice-principals, and the kid stocking the cucumbers at the store all get paid. You should too.

#5      there are a lot or rules about structure, conflict, plot, character and more and they’re all kind of boring.
For sure it’s important but if you write as much as you can and read as much quality shit as you are supposed to be, those basic story elements should start to become second nature. Maybe some people like to have a checklist and make sure they hit all the marks from the “how to write” book but that sounds like a cookie with no icing to me. The most useful books (or shitty blog posts) about writing are gonna be the ones that inspire you to write. The exception to the rule is a book on grammar. Grammar dictates the cadence and flow of everything you do. Know your grammar. You can break those rules later (who needs capital letters anyhow?), but only if you know them first.

#6      reading your work out loud can really help you hear the flow.
I almost never do it because I feel like a fucking idiot reading my own shit out loud to myself. But the truth it does help you notice clunky lines or words that just don’t flow. For scripts or stuff heavy on dialogue it’s an especially good idea. Make sure no one is around, or don’t. Do whatever you want, I don’t care.

#7      if you’re gonna start sending your shit out, research where you are sending it. this goes for fiction, journalism, whatever.
Don’t try to ram a square peg up a round hole. Even if your work is genius there will be places where it fits and places where it won’t. This is especially important for journalism/magazine stuff—research extensively and fish where the fish are. Ignorance is not bliss. It’s an easy way to live carfree, but it also kinda means you’re, at best, uniformed, and more likely an idiot.

#8      rewrite, rewrite, rewrite.
Then take seventeen days off before rewriting again. When you’re young it’s easy to think you’re a genius and that you can shit gold bars for breakfast. And maybe some people can. Most of us though, will never shit a gold bar in our entire lives, but we can always polish a turd. Rewrite the fuck out of your shit.

#9      write high, edit sober.
Or do it all sober. Or drunk. Or whatever works for you, but if you’re looking to make a career out of it, best wait until you’re sober before you push SEND.

#10      avoid alliteration.
It’s not as clever as you think, especially in a title.

This was originally written as a blog for the Whistler Writers Festival, where I often host/moderate the popular Crime Writers Luncheon. They picked the “Fledgling to Flight” theme for this one, though I don’t believe they ever used the blog. I stand behind the tips though, and the excessive use of foul language.

Meghann O’Brien: Wrapped in the Cloud