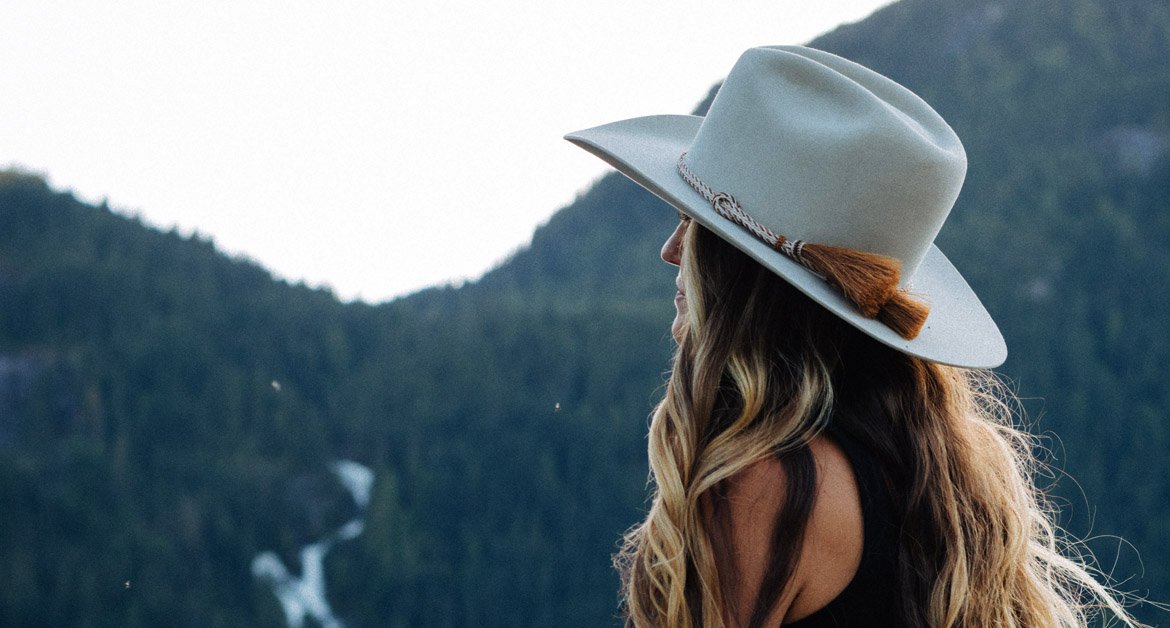 Mongolian horseback riders are said to have worn wide-brimmed hats since at least the 13th century. And while early American pioneers wore a variety of different hats while pushing west across the country (the bowler was popular) the archetypical cowboy hat seems to have evolved in the 1800s from the sombreros Mexican vaqueros (horsemen and cattle herders) had been wearing for at least 100 years.

“On the trail, a good hat is everything,” says Squamish River Horse Adventures’ Stacey Paradine. “It’s a sun protector, a rain protector and it also shields your face from branches or cobwebs on the trail. Out here, your hat is a part of who you are.”

Which means you want one that looks badass. For Paradine, that meant turning to Braeden Paterson for a custom build at his Paterson Hat Company workshop in Victoria BC.

“For the leader of a trail adventure company,” Paterson says. “I wanted to make sure Stacey’s stood out above the rest, literally. It’s real tall and wide but that’s made with intention to keep her head protected from the elements. The Silverbelly felt matches her horse Dusty and I don’t think there will be any mistaking who the boss of the trail is.”

Hand-crafting his first hat in 2015, Paterson apprenticed under a milliner in Montreal before studying with a number of masters across the western United States. He says the key to a good hat is quality materials (in this case: beaver fur felt, shaped by hand on a vintage hat block and garnished with a horsehair band).

“I pull inspiration from hats made over the last century and bring them into a modern day shape. If I’ve made a hat that looks good now, would look good 50 years ago, and has the quality of build to last another 50 years, I’ve done my job.”

One more thing about cowboy hats, Paterson explains, is that a ‘ten-gallon hat’, isn’t called that because of its size, nor does it mean the hat can hold ten gallons of water for your horse. The name comes from the Spanish word galón, which means braid. Some Spanish hats were fashioned with braids on them—ones that had ten braids on them were referred to as a ‘Ten-Galón hat.’

“I don’t recommend using your hat as a water bucket, but if you’ve got to do it, my hats will get the job done, I’ve tried.”

Since writing this piece I also became the owner of one of Braeden’s custom hats, a beautifully classy piece based on Clint Eastwood’s hat in the flick The Outlaw Josey Wales (see if you can recognize it in the slider of hat images above). No shitting, it is my most valuable possession.
Braeden says his favourite pie is lattice-top apple pie.
(We have a recipe for that.)