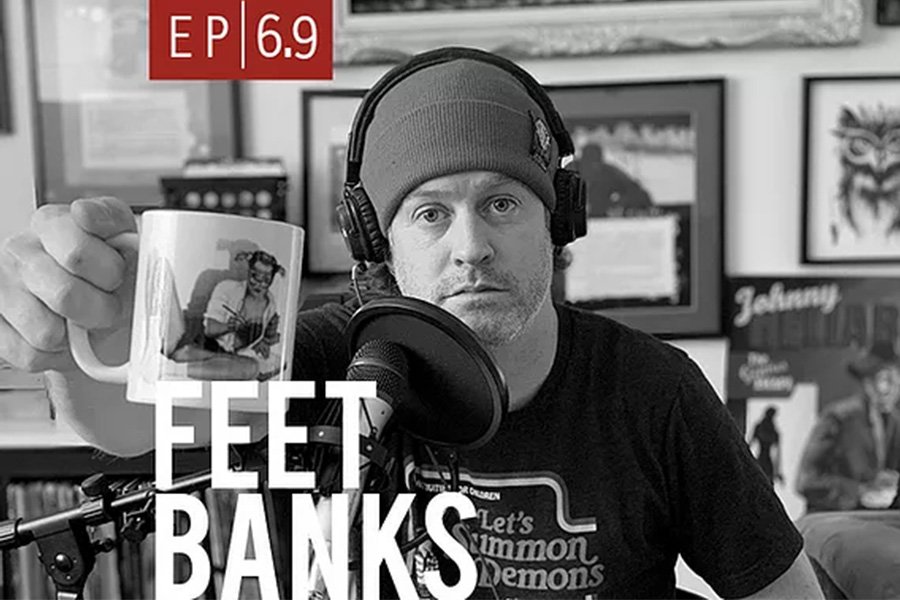 This was the first podcast I’ve ever been featured on, hosted by creative tour-de-force Andrea Helleman, who i admire because she fearlessly jumps into big endeavours with the confidence that she will figure it out and find her groove along the way. She always does. This podcast series is like being let in the back door of the super-popular nightclub that is the West Coast BC outdoor adventure scene. The other guests Andrea features are full of incredible and inspiring stories that would otherwise perhaps never be told in an archive-able manner. I think the Whistler Museum should be paying her to do these.

Here is what Andrea’s wrote to set things up:

Episode 6.9 will be explicit. We are talking with Feet Banks. As a writer, an editor of a magazine, a filmmaker, a host, an advocate of independent film, a movie columnist, a public speaker and figure, he’s always down for the cause, a real stand-up guy who is also one of the most devoted Dads going. He’s got his priorities in check and we recorded the podcast at his house with the intention of him tucking his son, Henry into bed that night. He gets away with pushing boundaries because everything he says and does is well done. The most interesting thing I learnt about Feet is that he was raised in the wilderness of Northern BC without electricity until he was six. Off grid before that was a thing. His first friend was a rooster named Houdini. He’s adaptable and a product of all of his environments.. When is family moved to Whistler BC at the age of 12 he seamlessly transitioned from the bush into a life heavily influenced by West Coast Gangsta rap. And today we see how all of those experiences formed him into the man, Father and friend he is today. And outside of himself. Feet Banks was half of the double decade of fearless friendship with Chili Thom that produced countless films, festivals and platforms. The two were eachothers’ biggest fan and biggest instigators. And for those of you who don’t know.. Chili Thom was the artist of our time and corridor. I got our friend Heather Paul to make a statement that I’m going to read to sum up Chili as succinctly as possible: I struggle trying to describe the legend that was Chili Thom. He was a nationally recognized and award winning painter, who spoke for all of British Columbia with his dreamy landscapes and perspective. He has been said to have ‘invented colours’ within his paintings – and the high brows agreed when the Audain Art Museum hosted a ‘Masterpieces’ show of his work shortly after he passed away. A show that was curated by Feet. If you don’t know who he is, google his name. The results are a jambalaya of eccentricity and merit: artist, filmmaker, TV personality, DJ, producer, advocate, and champion. Bascially Chili and Feet were men that wore a lot of hats and together they had them all. There bond and friendship stood the test of time and all of our hearts broke when Chili was taken too us too early by cancer. And my heart breaks again when I think of their friendship and what they created together. To this day their combined vision and friendship can be felt at the B-Grade Horrorfest… which was and is an event of independent filmmaking that doesn’t have a ceiling it’s a balls-to-the-walls go for broke night kind of night where your savage mind could truly run wild when making or watching the films. I’ve heard him reference others as fighting the good fight.. and I would say Feet Banks is the same… across all of the platforms. He probably does the most out of anyone I know. Whether he wants to be or not he’s a fixture at all our major life events the sad ones and the inspiring ones. Ok enough of me talking about this man… with all the wisdom, insight and whose everday diction is gangsta rap heavy… and because of that he shocks and disarms you with it’s potency. Let’s dive into grief, inspiration and how to fix the internet with the calculated Feet Banks.