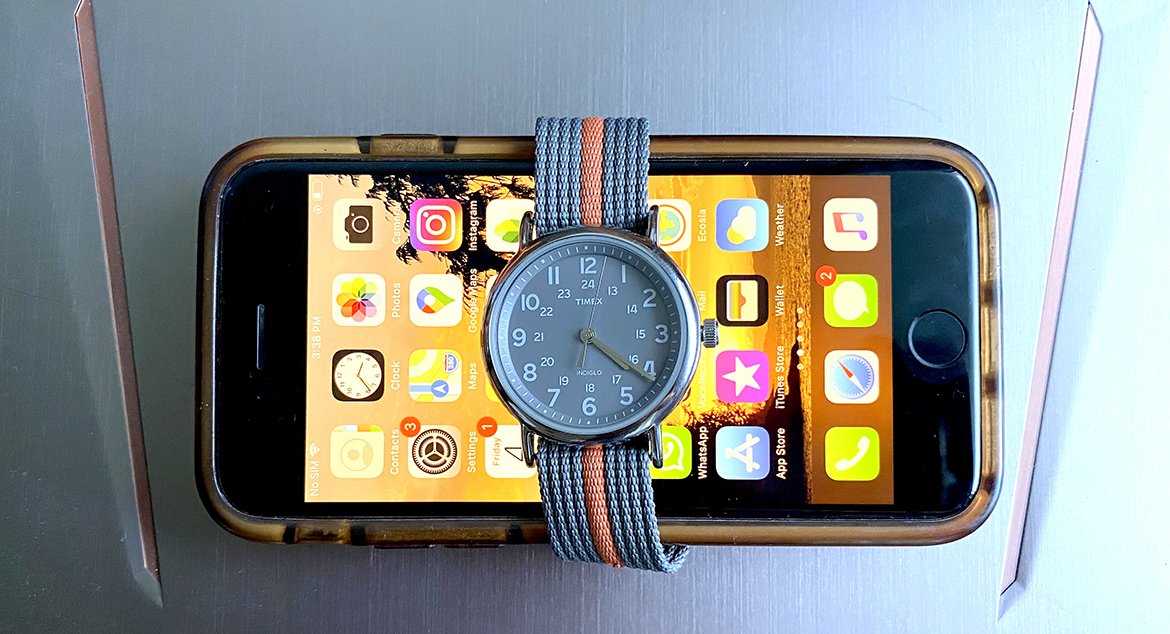 Yes, of course it also tells time, but so does my oven, that tower downtown, and a tonne of other shit. What makes the wristwatch noteworthy is all the minutes, hours even, it buys me each day.

Because so many times I’ve picked up my phone to check the clock… and there’s a notification, a missed call, new texts, a calendar update, a whatever the fuck. Or I’m suddenly reminded of a task I need to do, or a picture I wanted to send, an email I am waiting for, or I instinctively start wondering what Maxy-May is doing today, or how about that thing I heard about and wanted to look up… (To be fair, Ophiocordyceps unilateralis aka ‘Zombie Fungus’ is absolutely bonkers and totally worth digging into) … but actually all I want to know is what hour of the fucking day it is!

And absolutely, the smart phone is a lovely invention capable of all sorts of awesome things, but it’s also a monster with one glowing eye and invisible tentacles that can slip through the cavity behind your eyeballs and gorge on the soft tissues of the brain like some kind of insidious cyber-techno-vampire that sucks up your time, life, and productivity.

A wristwatch, less so. About a zillion percent less so. Sure, the gearheads, geeks, and marketers have tried to corrupt watches by re-imagining them as a tiny version of the phone (or a tiny fitness instructor) but in their purest form wristwatches really only do that one perfect thing: they tell the fucking time. And they’ve done so since about the 17th century (prior to this the only option were large, clunky “clock-watches” fastened to clothing or worn around the neck—shout-out to Flavor Flav for keeping that old school shit alive.)

And sure, the pocketwatch dominated for a while (cowboys and railways and petticoats and shit), and it’s true women wore “time bracelets” years before men did, but starting with the looks-like-more-colonialist-bullshit Anglo-Burma War of 1885 military officers began realizing that precisely coordinated attacks could more efficiently kill the other guys, so they outfitted their armies with wristwatches (easier to bayonet a dude in the throat if you aren’t pulling a watch on a chain out of your pocket).  The wristwatch as a military weapon really took off after WWI, and peaked in 1994 right here:

Somewhere after the great war, regular people began to see the advantage of being on time, and the gold wristwatch even came to symbolize dedication and service. A nice watch was a status symbol for the baby boomer, and by the 1980s, possessing an overly expensive watch became essential for coked-out Wall Street types, coked-out Hollywood types, and anyone else looking for an easy way to publicize that you felt superior to everyone else (they still had to wind them though, or time stopped).

For the rest of us, tiny vibrating quartz crystal power generated watches also hit the masses in the 1980s, which coincided with me being old enough to sometimes have to be somewhere at a specific time. So, I begged my parents for the coolest, most badass, most computer-y futuristic consumer watch of the era—the Timex Triathlon.

Built for people who needed temporal precision as they ran/swam/biked multiple laps around a set route, and/or kids who thought it would be cool to be Navy SEALs, the Triathlon was a marvel of engineering: a stopwatch, an alarm, some other shit, and it was water resistant to 100 meters (which is about 95% way fucking deeper than any consumer will ever go, but was also big deal because since basically forever if you got a wristwatch wet—by doing dishes, washing your hands after shitting, or getting pushed in a lake—you were fucked.)

One of the good things about not always having a lot of extra cash is I learned young to take care of my stuff, so my Timex Triathlon endured. And when it died, I got the new version (with Indiglo lighting!). That one died right away though, and as broke student in writing school I did the only think I could think of: I begged.

And it worked. That letter, taking that shot and relishing in the small victory of a “free” watch, helped kick me along the road to taking my writing more seriously.

(Side note: I saved all my letters in those beautiful pre-digital, pre-social media days—copies of the ones I sent and every original I ever received—Shelley Booth are you out there somewhere?

Just kidding, I know she is out there. I found her on Instagram, she looks happy and stunning as usual. I didn’t send her a message. There’s no need, a half dozen letters over two decades ago was perfectly enough. Time really does keep on slipping, slipping, slipping, into the future so there’s no point trying to hold onto it. Keep your eyes on the road ahead.)

But here’s the thing, that fucking letter worked in more ways than one. Because while I have been gifted other brands of wristwatch over the years, when I did recently snap and throw my phone across the room after scrolling, scrolling, scrolling through an endless stream of visual pablum, intellectual chaff, and a lot of stupid bullshit when all I really wanted to know was if I’d missed 4:20 or not….well, it was a this Timex watch that I ordered (on my phone, after I crossed the room and picked it up off the couch, there’s no way I’d chuck it at anything that could damage it.)

A shiny new Timex, oddly from the Peanuts Collection (the others had Linus and Lucy and the crew, the hands were actual hands). This one is probably not doing the Triathletes (or the Peanuts fans) much good, but I like it. It’s water resistant to the far-more-realistic ten metres and, most importantly, it has numbers. Numbers don’t lie.

I have no idea what this song is. I wanted the Snoop Dogg “Tick Tock ya don’t stop” riff but that comes at the end of the song Lodi Dodi so it didn’t really work. These cats, Bass Inc, seem to have constructed an entire song out of that concept though. Plus, their video only has 1080 views so they can use the love. Fuck, I’ve heard worse. Also, I’m here for that outfit and album cover; timeless.

Also: No, Timex didn’t pay me to post this story. I wish.