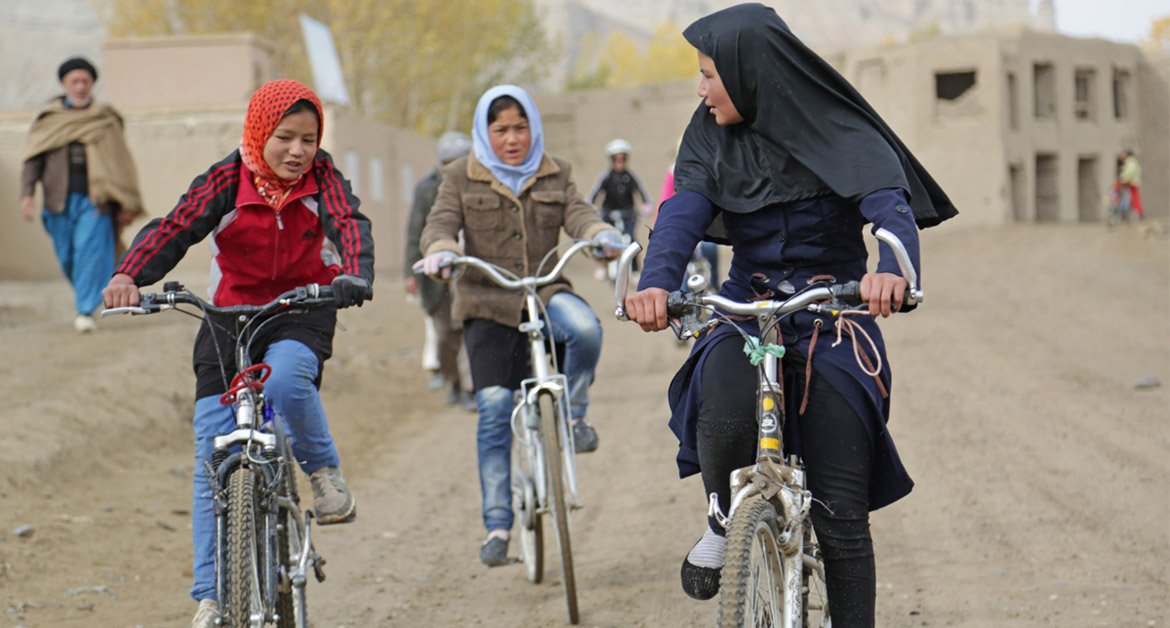 Tackling ancient and complex issues of equality and freedom, one pedal at a time.

2015 — “There is nothing simple about a girl getting on a bike in Afghanistan,” says filmmaker Sarah Menzies from her home in Seattle, Washington. “One woman we filmed would cover her face in interviews because 30 years ago she’d ridden a bike and was still fearful that her husband would find out.”

Technically legal, and not quite forbidden by the Quran, a woman riding a bicycle is still very taboo in Afghanistan. “It remains a culture that keeps women at home and a culture where men make decisions for women,” Menzies says, adding: “There is still the outdated belief that putting a bike between a young woman’s legs will compromise her gynecological health. In some parts of the country a girl on a bike is a death wish.”

Yet for all of that, her upcoming film Afghan Cycles doesn’t focus on oppression, or victimization. “It’s about bravery and heroes,” Menzies explains. “I believe that a story driven by hope is much more powerful than one driven by sorrow.”

The film idea came to Menzies through Shannon Galpin, who’d founded the organization Mountain2Mountain to create education and opportunity for women around the globe. “Shannon had just been using the bicycle to get around Afghanistan,” Menzies explains. “As a six-foot tall white woman riding into towns she attracted a lot of attention [from men], and so she would ask Do your daughters ride? Do your wives ride? The answer was always No.”

Along the way Galpin discovered a newly formed Afghan Women’s National Cycling Team in Kabul. Supported by Mountain2Mountain, the woman’s team consists of 16 to 24-year-old Kabul locals who train with the Men’s National Team and are recognized by the Afghan Olympic Association. The initial concept was to film a short piece about this team of Olympic hopefuls, but after an initial trip to Afghanistan in May of 2013, the focus shifted: Menzies discovered young women riding together in other parts of the country—and for other reasons.

“When you give a girl or young woman a bicycle you’re also giving them mobility and independence,” says Menzies. “A vehicle to get from point A to point B without relying on men, whether to get to school more safely or just get around in a more efficient manner.

Slated for release in early 2016, Afghan Cycles is a feature-length documentary film telling the story of young Afghan women who challenge gender barriers and putting their lives at risk for the simple pleasure of riding a bicycle.

But old traditions die hard in Afghanistan. During filming Menzies heard stories of female cyclists having handlebars jabbed into their backs by men passing on motorcycles, or having stones thrown at them. In the spring of 2014, the country’s presidential elections resulted in heavy Taliban attacks and unrest, forcing the girls to quit riding for six months. Even in times of comparative peace, riding on terrain other than established roads or goat paths is highly dangerous— Afghanistan is one of the most land-mined countries on the planet.

“Cultural context plays a huge role there,” Menzies explains. “Just understanding the reality these girls live in—riding past blown-out buildings and people walking the streets with AK-47 rifles. Everyone has a story of losing a family member or friend in a suicide attack. It’s a conflict zone and I had to see it myself to really understand that these girls are living under constant threat simply because of where they live.”

Nevertheless the promise of change and positivity is easy to find. While women in rural Afghanistan often still wear the full burka covering, the winds of change are blowing. “Places like Kabul and Bamyan are a bit more liberal, a bit more progressive. You are even seeing girls in jeans. For me that is a cool parallel—something considered taboo is now normal—Afghans are definitely capable of changing with the times. The girl who was knocked off her bike and hospitalized by the guy with the motorcycle handlebar? The governor of that province tracked him down and put him in jail. There are people there, men and women, saying this behaviour is outdated.”

Menzies admits that even as more Afghan women take to cycling, ironically it will remain the men who create any real shift of acceptance. “The girls profiled in the film have permission from their fathers and brothers, and in once case a husband. Having the support of the men in their lives is unique, so showing the stories of these men will potentially be effective in changing the minds of other men outside of more progressive zones like Kabul.”

All that is still a bit peripheral though, to the women actually riding the bikes. “The girls in our film are so innocent,” Menzies says. “They don’t see themselves as little freedom fighters, none of them are demanding equality or saying, ‘Fuck the Man!’ They’re just doing it because they love riding a bike—they just want the wind in their face. And yet they’re still breaking gender barriers, so one of the tricky parts of making the film was showing how badass these girls are, even if they aren’t saying it themselves.”There is nothing simple about getting a girl on a bike in Afghanistan. But once she’s on, it’s easy to understand why she’d want to stay there.

I met Sarah Menzies while filming some random tourism stuff in Whistler and was instantly smitten with her easygoing and friendly creative style, but could sense the power and drive she had inside. When we chatted for this story, published in the 2015 Mountain Life Annual, the film was still a work in progress. It’s since been completed and you can learn where to stream it at afghancycles.com