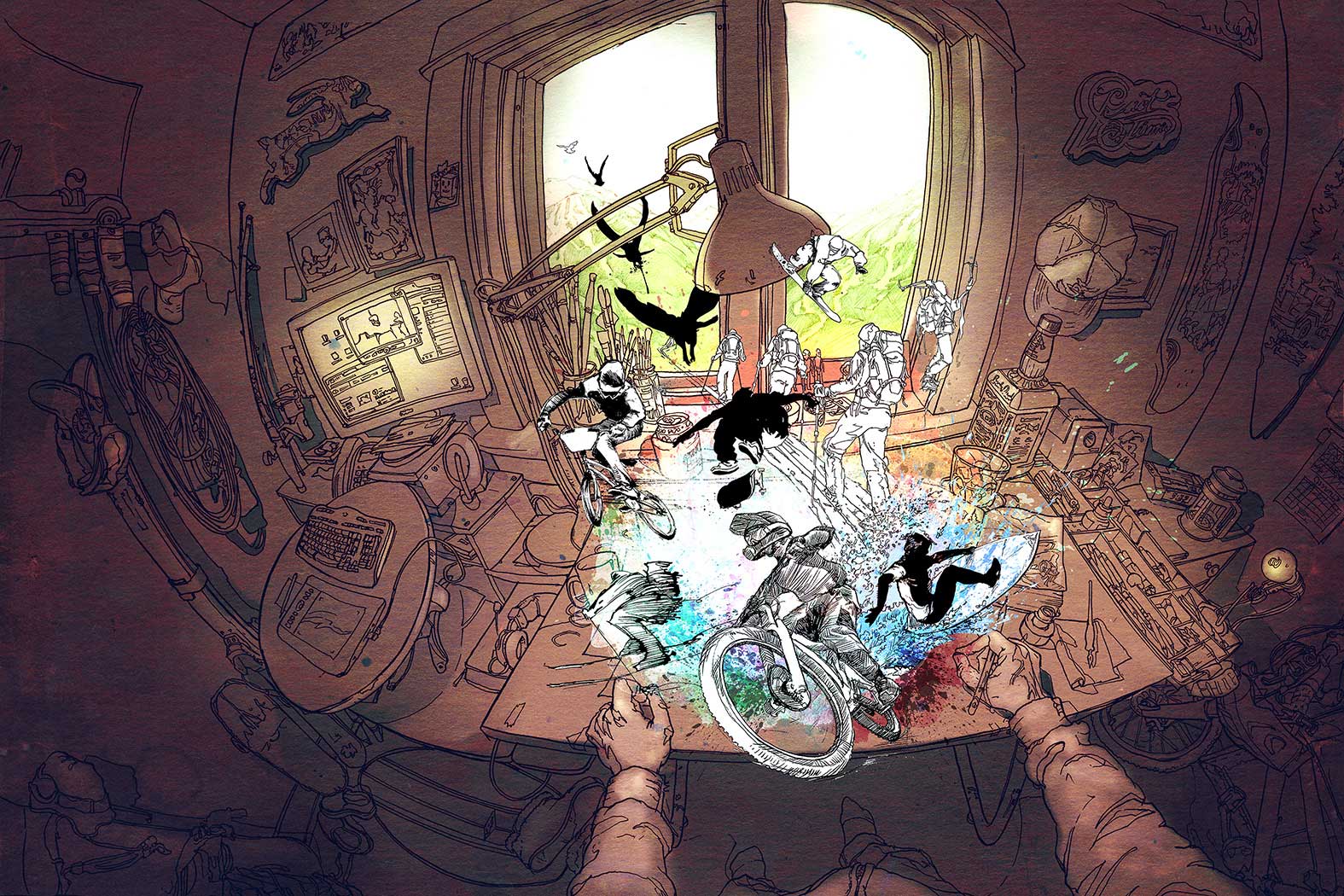 Dave Barnes is a visual artist, but at the moment he’s sipping whiskey and pondering the other senses, especially sound.

“I think it was the Romans,” he says,” in battle they would drill these 3-millimetre holes into little wooden beads and shoot them at the enemy. The sound of these beads whizzing and zinging past their heads ; it made everyone reassess their commitment to the cause. The Romans didn’t have to hit you to win, they just had to make you think they could.”

The art of psychological warfare, but Barnes is not finished yet. “Or rabbits,” he says. “I have painted a lot of rabbits, but never really put much thought into anything other than how they look. Rabbits are almost silent their entire lives, until the end when they scream this piercing bloody wail, like a banshee. It’s their evolutionary defense, it makes you not want to kill another one….”

Rabbits, mountain bikers, zombies, avalanches – Dave Barnes has been the go-to illustrator for premier Canadian outdoor publication Mountain Life magazine since issue #1 hit the stands 13 years ago. And while his work draws from an incredibly rich and nuanced imagination, in the real world, he lives with the kind of simplicity many of us dream of: no cell phone, no TV, a small family in an unassuming home beside a creek in the woods of Vancouver Island. Within that simplicity however, he is able to create artwork with incredible depth, and the secret, he says, is in the negative spaces.

“As people, we are constantly picking up on the silences, the pauses, the spaces in between,” Dave explains. “We’re always reading between the lines, even if a lot of it is subconscious, and often that is where the meat of a thing is. That’s why I really like black and white drawings, because even the pen pushing into paper creates tiny ridges that make shadows. The eye simplifies it, but those shadows create the third dimension, a textured line in between dark and light.”

As he refills our drinks, Barnes spins the current conversation back to one we first discussed when he was featured in the Spring 2007 issue of Mountain Life, as a fresh graduate from Sheridan Art College in Ontario. Having moved back out west to start a career, Barnes explained how “the warmth of human error” is what helped differentiate artwork in an industry that was increasingly digital and saturated with perfect Pantone colours.

“Nowadays, I think maybe that sense of texture is more important,” he says. “All the colours are there, the lines are the same, but the eye can tell the difference and see the human effort put in. I don’t know if a computer can tell what that is yet­ – because everything is ones and zeros. It can recognize human error, but maybe not human effort – the time and energy it takes to actually touch the pen or brush to the paper. We don’t even recognize it all the time, but we can tell there is something different, something that speaks to us…. That might be enough that the computers will keep us around for a while longer. I hope so.”

Despite all the art-versus-machine talk, Barnes admits that with a young family to provide for, 90 per cent of his output these days is making computer-based illustrations for magazines like us. “Draw it, scan it, make the changes,” he says. “Then colour it digitally and send it off. I like it though, because everyone wants something different and the deadlines mean you have to finish it. Deadlines create honesty. They bring a sense of rawness to the process – you go to battle and then you are done.”

For Mountain Life, Dave Barnes has gone to battle more than 50 times over the past 32-issue, ten-year stretch. His love of snowboarding, telemarking, skateboarding and exploring old logging roads have guided him as he handcrafts the exact visual aesthetic and mood we want to bring to our readers. The warmth of human error, the value of time and effort, the readiness to embark on a journey or wage a battle that can be completed but perhaps never won.

Dave lifts his empty-again whiskey glass and swirls the ice next to his ear with a swishing clink. “You hear that?” he asks. “The simplest little sound, but it means so many things – minutes passing, deep conversation, and time to get the bottle. Such an everyday sound, but how the hell could I ever draw it?”

This article was first published in Mountain Life Magazine in late 2016. Barnes and I have been very close friends since 1999. I love interviewing my friends because the conversations flow easily and I put added pressure on myself to do a good job.

When it comes to eating pie, Dave says, “you can’t go wrong with Blueberry.”